Saints Borys and Hlib, Princes of Kyiv and Martyrs for the Faith

On July 24th on the Gregorian calendar and on August 6th on the Julian calendar, Our Ukrainian Catholic Church commemorates two princes of the ancient Kyivan state who were among the first to be canonized saints. They were the youngest sons of St. Volodymyr the Great. They chose to rather die for the faith than to engage in battle against their other brother-princes.

Following the death of their father, St. Volodymyr the Great, many of the brother-princes engaged in a battle for the

acquisition of land and title. Unlike the other brothers, they chose not to fight and kill the other. They chose rather to peacefully accept death, martyrdom from their own brother-prince. They accepted death with calmness and a determination to follow the ways of Christ, their Lord and Master.

One of their older brothers, Sviatopolk, had a devious plan to ascend to their father’s throne in Kyiv. First of all, Sviatopolk does not reveal to his brothers the news of the death of their father, Volodymyr the Great. This Sviatopolk contrived would enable him to quickly begin ruling in his father’s place in Kyiv.

One of the brother-princes, Borys, had begun to return home towards Kyiv. Borys on his way back home hears of his father’s death and become saddened and quite upset. The soldiers under Prince Borys’ command had heard of Prince Volodymyr’s death and relay the news, asking Borys to return to Kyiv. The soldiers under Prince Borys’ command wanted this so as to force Sviatopolk out of the city of Kyiv and place Prince Borys on his father’s throne. However, the saintly Prince Borys could not and would not even consider such an action against his brother, Sviatopolk.

Nonetheless, Sviatopolk remained sinister to the very core of his being. His evil intent did not wane. Sviatopolk sent emissaries to his brother at night with the intent to kill Borys. As those who sought to kill Borys approached, the Prince continued praying and made no attempt to run away or escape from the hands of men determined to kill him. The perpetrators of this deadly and vicious deed acted like wild beasts. The death of his brother-prince Borys was not enough for Sviatopolk. His intent was to have all the other brother-princes gotten “out of the way” so that none of them could rival him for their father’s throne. Sviatopolk desired to succeed his father as “Grand Prince of Kyiv.”

Prince Hlib, the youngest of the brother-princes would become the next victim of Sviatopolk’s mad and evil intent. Hlib had been ruling in Murom where his people regarded him as “modest, gentle and humble.” The people loved and greatly respected Prince Hlib.

Sviatopolk sends his brother Hlib a deceptive message that Volodymyr, their father, was ill. When Hlib received the message, he hastened to Kyiv to visit his “ailing” father. But in fact, Volodymyr was already dead. Besides the sad news of the father’s death, Hlib hears about the death of his brother, Borys.

As Hlib was hastening to visit his “ailing” father, Yaroslav, another of the brother-princes informs him that their father Volodymyr had already died. And besides this sad news, Hlib is informed that their brother-prince Borys was also dead. Yarolav also sent a warning to not travel to Kyiv lest he encounter the same vicious and scheming act of Sviatopolk as did Borys. Recall that Sviatopolk wanted to do away with each and every other brother-prince and have no rival or challenge to ascend the throne and become “Grand Prince of Kyiv.”

Nevertheless, Prince Hlib decided to travel to Kyiv where he too accepted martyrdom with calmness and with faith in Christ and compliance with the Gospel’s teaching: “Blessed are the peacemakers, for they shall be called sons of God.” (One of the Beatitudes taught by Christ in Hi Sermon on the Mount, Matthew 5:9) Both martyred brother-princes Borys and Hlib chose not to become deceptive rulers nor to use violence as a means to an end.

Although Sviatopolk may have been a brother “by blood”, that is of natural origin, most certainly he was not a brother who shared a common faith in Jesus Christ as lord and Master. Ultimately, Sviatopolk did not succeed in ascending to the throne of Volodomyr the Great. The people of Kyiv had rebelled against Sviatopolk and expelled him from the city. It would be Yaroslav who would in the end sit at the throne of Volodymyr, their father.

Following their death circa 1015, the veneration of the princely martyrs Borys and Hlib quickly grew and spread throughout the ancient Kyivan state. The people recognized their courage, fortitude, to remain steadfast in the faith. Already in the year 1072 both Borys and Hlib were officially canonized, recognized as saints of our Church. This veneration continues to this very day in both the Ukrainian Catholic and Ukrainian Orthodox Churches.

Many Ukrainian Catholic and Orthodox men have one of them as their patron saint. Archbishop-Metropolitan Borys Gudziak of Philadelphia was named after the saintly martyred prince 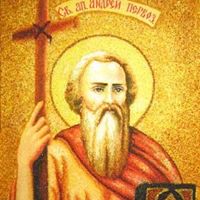