Zarvanytsia. The most significant pilgrimage center in Ukraine

This week we will look at Zarvanytsia. Located in the Ternopil region in Western Ukraine, Zarvanytsia is the most famous pilgrimage destination in Ukraine.

The Village of Zarvanytsia is located in a picturesque area of the Podilia region in Western Ukraine. The River Strypa flows through it and carries its calm waters through the valleys and into the Dniester River. On three sides, the village is surrounded by low hills covered with dense forest. The diversity of trees, caves and canyons form a scenic landscape.

According to local tradition, the village received its current name with the miraculous icon of the Mother of God in 1240, during the time of the Tater-Mongol Yoke in Ukraine. Earlier that same year, Kyiv was invaded and the Church of Tithes and many monasteries were destroyed. Trying to save their lives, the monks fled. The survivors made their way to Galicia seeking protection from local princes who had agreements with Batu Khan.

The miraculous icon of the Mother of God

The legend tells of one of the Kyivan monks, a native of Galicia, who managed to escape the invaders. On his way to Terebovlia, he stopped in the woods for a night, exhausted from hunger and his wounds. The monk sincerely prayed for his war-torn land, asking for the intercession of the Mother of God, yet soon fell asleep while praying. In a dream, the Blessed Virgin Mary appeared with two angels holding white lilies. The Mother of God blessed the monk and touched him with Her omophorion. The monk woke up and saw a beautiful valley surrounded by a wreath of dense forest. Suddenly a spring of clear water shone in the dewy grass, and above it, the icon of the Blessed Virgin Mary with the baby Jesus in her arms flashed with celestial brightness. The monk fell to his knees and prayed earnestly while washing his wounds. Soon his strength returned to him, and in honour of this miracle, the monk built a cell in a cave and placed the icon there.

He also called the place where he fell asleep – Zarvanytsia (from Ukrainian – zarvav). People heard about the miraculous cure and started coming from everywhere, hoping to be cured as well. According to another legend, even prince Vasylko of Terebovlia was healed through the mediation of the Mother of God of Zarvanytsia.

In 1867 Pope Pius IX granted Zarvanytsia the status of a sanctuary. The icon of the Mother of God was crowned and moved from the chapel to a brick church thanks to a local priest Fr Porfiry Mandyczewsky

During the Second World War, the miraculous icon of the Mother of God of Zarvanytsia was hidden by the villagers, as they feared its destruction. The icon was returned to the church only in 1989 when services resumed after the era of Soviet bans.

Icon of the Crucified Savior

The icon of the Mother of God of Zarvanytsia was not the only shrine of the pilgrimage site. One summer evening in 1740, a resident of the village, Stefan Ryzan, went out into the field and noticed a ray from the sky illuminating the image of the Crucified Savior. The oxen, which the peasant was riding, fell to their knees under the influence of this light.

The image of the Crucified Jesus was taken and placed in a wooden church. During the fire of 1754, the church burned down, but the icon remained intact. As a valuable miraculous relic, it was solemnly transferred to the new church, built in 1754 at the expense of Count Myonchynsky, the then owner of the village.

In 1944, the miraculous icon of Christ Crucified was taken to Lviv at the end of the war, and it disappeared without a trace afterwards.

Over the centuries, Zarvanytsia, as a village and a place of pilgrimage, has repeatedly suffered from enemies. At the end of the 17th century, the town was destroyed by the Turks. In the 19th century, after the abolition of serfdom, Jews took advantage of social inequality and, by buying peasant property, actually took possession of Zarvanytsia.  Metropolitan Andrei Sheptytsky spent much time and money to buy back this holy place from Jews at the beginning of the 20th century.

However, it never ceased being a place of pilgrimage. In 1894 a chapel was built in the forest above the miraculous spring. Zarvanytsia became more and more famous across the world. Every Sunday and holiday in the summer months, thousands of people visited the shrine from different parts of Western Ukraine, although most pilgrims came in May. The festivities began with the Divine Liturgy in the church or a chapel near the church, and then the procession went to the chapel and the stream. Prayers were recited there and water was blessed. Many visitors brought their sick friends and family. On their knees, they prayed to God and the Blessed Virgin Mary to give them healing from various ailments.

During the First World War, the church was damaged by shells, but it was Soviet rule that caused the most significant damage to this place of pilgrimage.

When the UGCC was persecuted in the post-war period, the Soviet authorities did everything possible to prevent people from coming to Zarvanytsia. In 1946, the authorities destroyed the monastery and banned pilgrimages. However, people continued to go to the Mother of God to ask for her intercession. Authorities then decided to destroy the spring itself, blowing up the chapel above it in 1960 and fencing the area with barbed wire. But, even this did not stop the pilgrims. On the contrary, it provoked an even more significant influx of people who, hiding from the NKVD, came to the stream at night, begging for healing.

Throughout Zarvanytsia’s long history, there are thousands of testimonies of miraculous healings of the sick and other miracles. When in 1772-1773, the plague threatened the population of Berezhany, people turned to the Blessed Virgin Mary and the Crucified Savior in the Miraculous Icon and to the water from the well. The epidemic receded, and hundreds of the sick recovered.

Zarvanytsia on the eve of and during Independence

During the persecution of the faithful of the UGCC (1975–1989), Metropolitan Volodymyr Sternyuk appointed Fr. Vasyl Semenyuk as the church’s rector in Zarvanytsia and gave him the right to renew the dismissals. In 1989, under pressure from the faithful, who did not give up their faith and devotion to the Church, the parish church was reopened, and the first “official” Liturgy was celebrated there. Since then, Zarvanytsia has been rebuilt. In 1991, with the blessing of the then Bishop Cyrus Michael (Sabriga), the rector of the seminary, Fr. Vasyl Semenyuk, together with seminarians, undertook the restoration of the chapel above the spring and the Way of the Cross.

In 2000, the Head of the UGCC, His Beatitude Lubomyr Husar, consecrated the main church. A little later, in 2001, the 75-meter bell tower and the so-called Gate Church were consecrated as well. In 2012, with the assistance of seminarians from the Ternopil Seminary, organized by their rector, Bishop Vasyl Semenyuk, the church of the Holy Eucharist was built.

In 2018, the Marian Spiritual Center was added to  the Church of the Mother of God, a replica of the place where the Virgin lived in Nazareth. In 2019 the Ukrainian Jerusalem complex was consecrated.

To this day, Zarvanytsia is continuing to develop  and grow as the most significant pilgrimage center in Ukraine and is one of the 25 largest Marian spiritual centres in Europe. Every year, millions of pilgrims come to this place of worship to pray to the Blessed Virgin. Every July the largest all-Ukrainian pilgrimage is held, which for the last several years has been headed by the Father and Head of the UGCC, His Beatitude Sviatoslav. 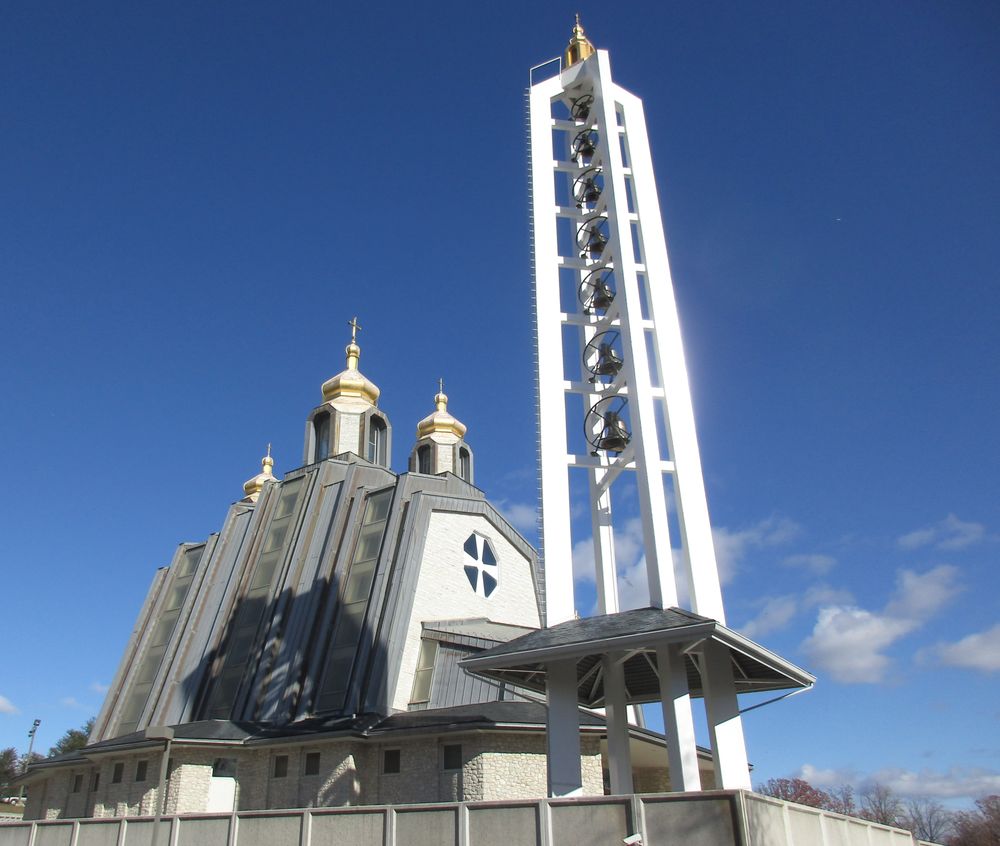